Rachel Harding: Working with an Open Notebook Makes Me a Better Scientist

As a postdoctoral fellow at University of Toronto, Rachel Harding spends her days in the lab researching Huntington’s disease. Specifically, the early career scientist is trying to understand the mutated protein structure in individuals with Huntington’s in hopes of discovering new avenues for treatment.

Harding is an advocate of open science, sharing what she learns through her research online in real time. 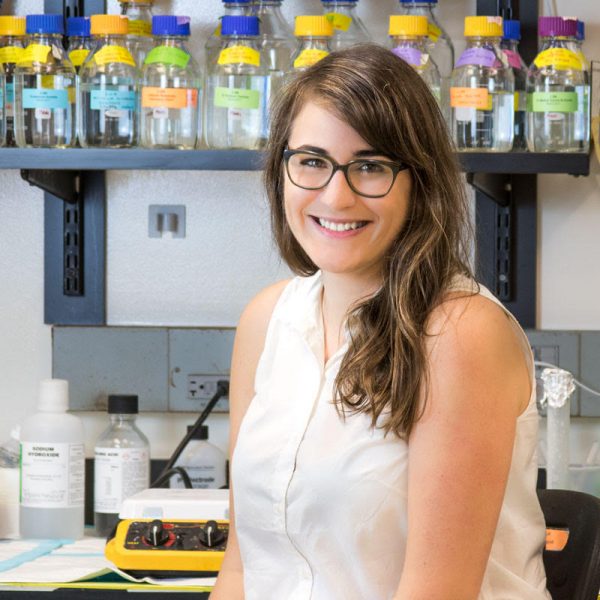 “One thing I’ve always felt strongly about is equity of information,” says Harding, a native of the United Kingdom. “The work I’m doing is funded by patient-based charities. The money we are spending in the lab is raised through bake sales and running marathons. I feel it’s my inherent duty and responsibility when using research money raised in those ways or through tax dollars to create the maximum impact. No one can argue that locking research behind a pay wall is going to do that.”

Sharing results in real time
Since 2015, Harding has worked at the Structural Genomics Consortium where the philosophy is to accelerate research into understudied aspects of the human genome and make all output freely available to the scientific community. Harding maintains a blog, Lab Scribbles, where she uploads data in its rawest form, providing a taste of the everyday reality of being a postdoctoral scientist.

“It’s helped me be a better scientist. You have to constantly write and reevaluate your work,” says Harding, of operating with an open notebook as part of her routine work flow. “That self-evaluation is really productive for me. Writing up your experiments as you go along has benefitted my research and I hope it encourages other people to do the same.”

Harding says there is a “small army” of like-minded scientists and they are getting positive feedback sharing their work as they go rather than waiting to publish in a journal. It’s a bit like “laying your soul to bear” to be realistic and open, but Harding says is important skill for researchers learn. It’s a useful to be reflective, compare findings to the original goal and continually present, she adds.

Working to make a difference
Harding, who has an undergraduate degree in molecular and cellular biochemistry and a doctorate in pathology from Oxford University, always wanted to be a scientist. She says she’s struck by how some older researchers can be jaded, only publishing results that give them prestige and advance their careers.

“Most people get into science because they want to help people. It’s important that we always remember that,” says Harding whose work at the nonprofit SGC is dedicated improving the lives of everyone affected by Huntington’s disease. Harding says she’s motivated to do all she can to help people who die at an early age from this rare disease where the gene has been mapped but the search is on for therapies to help patients deal with a “quality of life that is unimaginable” for most who endure the symptoms.

In her blog, Harding aims to make science accessible. She summarizes each post and explains the reason she undertook an experiment, the methods, its outcomes, and overall relevance in plain language without scientific jargon. “The more people who can understand this work, the better,” says Harding. Her approach with “interactive science’ aims to connect with patients, academics and the general public. Harding is also active on social media sharing her research.

Envisioning a more transparent future
Harding attended her first OpenCon meeting sponsored by SPARC in 2016 and was encouraged by the energy of the early career researchers. She became a committed advocate for the open agenda and joined the SPARC Steering Committee in April.

Although she understands the concerns among some researchers about being scooped working in open science, Harding says she optimistic that transparency will eventually be common practice in labs. She says the landscape is changing as pre-prints become the norm, funders tie grant to open science, and more people question the value of pay walls operated by commercial journals.

“Having innovative solutions to scholarly communication and research open to as many people as possible is really important,” says Harding. “You are marking your place in the environment with your stamp and data as you move along…We are presenting so many other aspects of our lives online in real time, why should science be any different?”

Reposted from the SPARC blog which is profiling with members of the OpenCon community.