OpenCon: the conference that made me realized I was an Open Science and Education advocate!

I get easily bored at conferences.

Especially if they are lecture-based and speakers are talking about their published work. I did my K12 education in Senegal, West Africa and it was not hands-on. We just sat and listened all day. After I moved to Europe, and later the US, my education became more interactive. Now, I have developed an utter dislike against formats that aren’t interactive. Conferences should be organized in a way that encourages people to talk to each other and be proactive. Many scientists I know (including myself) are introverts. I do not like talking just for the sake of talking: I need a stimulus from the environment to really participate.

When I arrived in Washington DC to attend OpenCon 2016, I had limited knowledge about OpenCon itself. I just expected that it would be like any other conference—that I would be a passive attendee as usual and would talk a bit about SeeSD, the STEM education not for profit I started in Senegal. I was also very confused about the program and was not really sure what was going to happen during the conference. I am glad I was wrong. OpenCon is an excellent self-organizing conference that requires active participation from attendees. The meeting started with a keynote talk by Brewster Kahle, the founder of Internet Archive. He walked us through the concept of a “decentralized Internet”, something I was not very familiar with, but that I fully embraced now and even advocate for.

My favorite part of the conference was the story circles: a storytelling session where conference participants were divided into small groups and each group member tells their story by answering: what brought them to OpenCon? In my case, I applied to OpenCon because I cared about diversity in STEM (Science Technology Engineering and Mathematics) and because I believed the main barrier stopping African communities from fully embracing STEM is cultural relevance. To bring that cultural relevance, it is imperative to design Open Educational Resources using local languages. 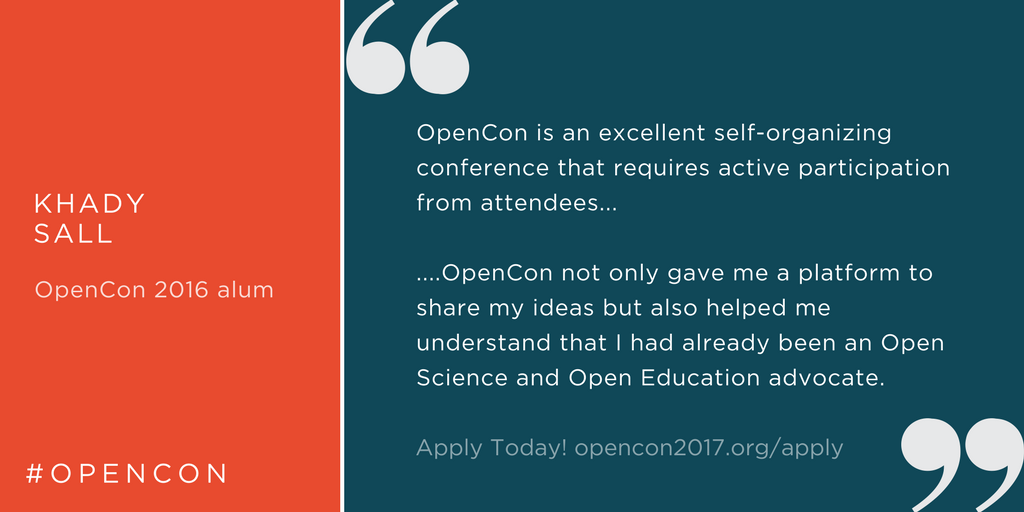 OpenCon not only gave me a platform to share my ideas but also helped me understand that I had already been an Open Science and Open Education advocate. I even ended up leading an unconference session panel about Open Education in Africa, where we discussed about strategies to democratize education and overcome challenges related to Internet access in the continent. Believe it or not, I did not consider myself an Open Science and Education advocate before OpenCon. I was not even familiar with those terms. I applied because I saw possibilities to network and I thought my vision in terms of science education fitted some of the OpenCon mission.

Since OpenCon, I have fully embraced being an Open Education and Open Science advocate. It has helped me build an important network of collaborators with similar vision and goals. Through them, I became aware of many opportunities (funding, fellowship, workshops) that I would have otherwise missed. I would strongly recommend anyone—especially minorities and young leaders from the Global South—to apply for OpenCon 2017. You may already be aware (or not) that you are an Open Access advocate; either way, you will build an open and dynamic network if you attend.

I recently came across a paper that highlighted that Open networks are the most important predictor of career success. OpenCon is a conference where you can build an open network that leads to collaboration with wonderful and brilliant open-minded people.

Applications to attend OpenCon 2017 in Berlin close August 1st. You can apply at: opencon2017.org/apply