Building an Open and Equitable World: My Experience at OpenCon

When I filled out my application to OpenCon 2016, I talked about knowledge and power, arts-based education and my dream to involve youth in research. What I did not say was that I was very skeptical of what we could achieve in three days. Would OpenCon be the same-old scholarly communications conference we keep going to? Academic-centric, overly technical and not particularly inclusive of (or interested in) more diverse or critical views?

Well, I was wrong. OpenCon was the most transformative conference I have attended in my short academic life. From November 11 to 13, OpenCon gathered students and early career researchers from over 60 countries in Washington DC to discuss open access, open education and open data initiatives. But the experience of attending was so much more than that. OpenCon was a diverse, equitable and inclusive space, where we could reflect, engage in critical debate and deliberate on how open access to knowledge can bring us closer to a more just and equitable world.

"OpenCon and the wide diversity of participants that attended helped me realize there was no formula on how to be an advocate for openness."

OpenCon and the wide diversity of participants that attended helped me realize there was no formula on how to be an advocate for openness. I met a DOAJ ambassador who majored in dance and is passionate about women’s rights, a medical student who uses comedy skits to advocate for affordable healthcare and a Creative Commons ambassador who hosts a community radio show (shout out to Ivonne, Peter and Juli). The common denominator between them, on top of their grit and drive, was that they thought of openness as a practice beyond scholarship, intimately linked to their creativity and aspirations for social justice. This is what brought us together.

"We were really talking about power, global inequities, and the infinite greed of the publishing industry; but like any good story, we dropped the jargon and focused on the very real ways enclosure of knowledge affects people’s lives."

Since the first day, our personal stories were at the center of our conversations. In story circles, we talked about that paper we could not access, those hefty price tags on our university textbooks, and that moment when we saw a light in open. We were really talking about power, global inequities, and the infinite greed of the publishing industry; but like any good story, we dropped the jargon and focused on the very real ways enclosure of knowledge affects people’s lives. It was not so much about what we were doing but about why it matters.

Reactions after the story circles

As the conference progressed, participants (including myself) started growing in confidence as a result of these raw displays of honesty; raising our hands to participate in the discussion. An intervention by a nonprofit law resource librarian stood out to me. She seemed antsy, overall frustrated with the group, hesitant to participate, until she finally grabbed the mic (and I paraphrase):

“We keep talking about availability when we should be talking about accessibility. Every day, I watch people struggle to understand the information in which their access to rights, safety, sometimes survival, depend upon. As a librarian, I am not allowed to offer interpretations, I can only point them to the right resource, so I have to sit there and watch them struggle. Open, accessible knowledge can save lives…” 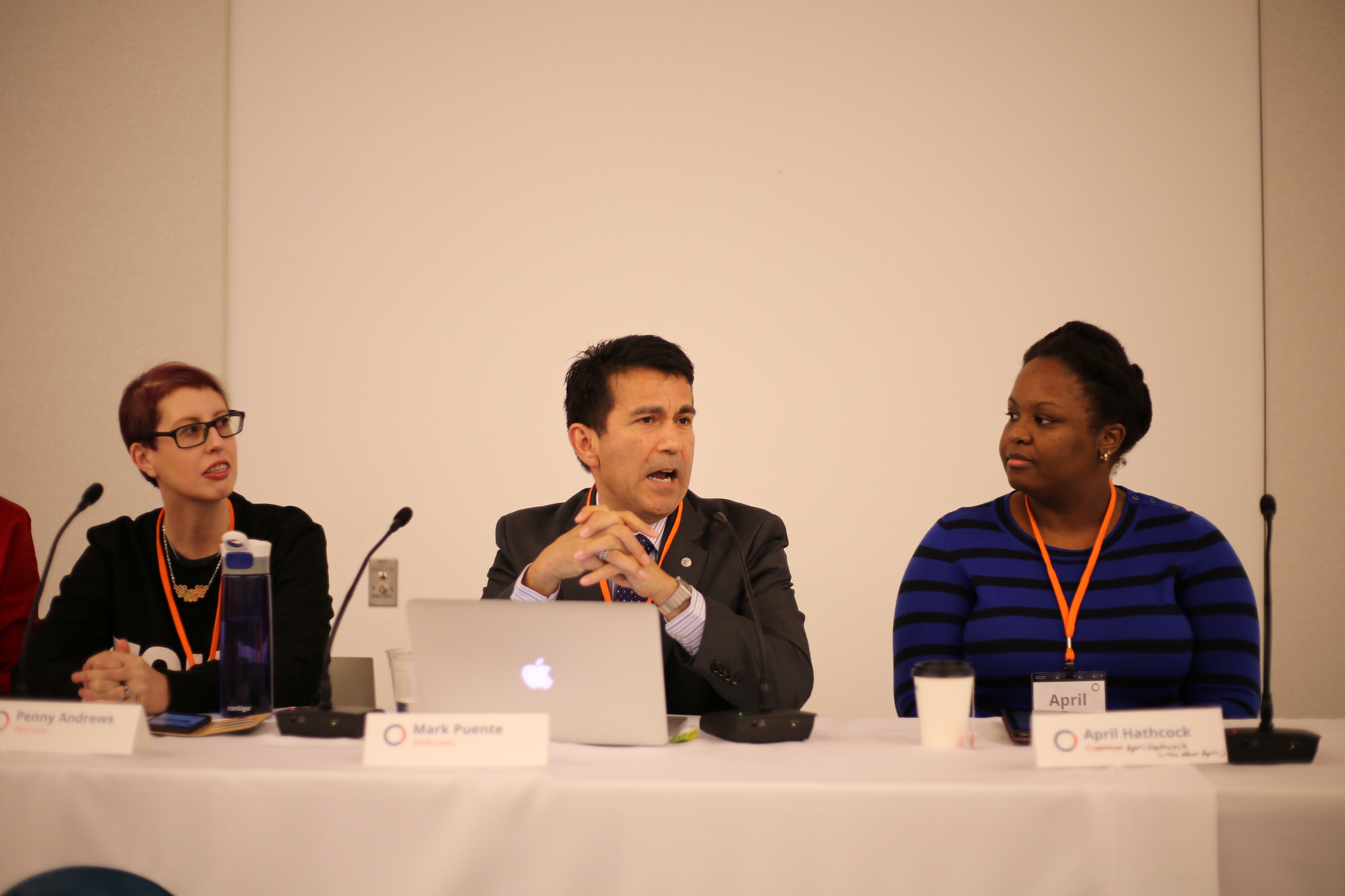 A similar sentiment was echoed in ‘Equity and Open’, a panel on why equity matters in scientific production. Mark Puente discussed the need to procure safety for marginalized, racialized and LGBTQ+ voices both in and outside the scientific community.

April Hathcock addressed colonialism and the domination of the English language in academia, by alternating between Spanish, French, Portuguese and English in her speech; and Penny Andrews commented on the silence around disability, mental health and low self-esteem experienced by young researchers in academia.

The critical voices of OpenCon reminded us that we do a far greater service to openness by staying critical than by being its cheerleaders; that we were not in OpenCon to build yet another model or “scholarly utopia”, because among other reasons the people most affected by the enclosure of knowledge were not in that room; and that our idleness has very real consequences, particularly for disenfranchised, marginalized and oppressed communities. Isn’t this what we want out of conferences? To learn, unlearn and be challenged?

OpenCon is building a community that defines openness in terms of the hope it offers, the voices it amplifies and the relationships it nurtures. Spending a weekend with the incredibly ambitious and inspiring young researchers who attended, made me hopeful that open research initiatives will continue building its strongest arguments based on the experiences and knowledge(s) of diverse groups of people; drawing from stories of resilience that demonstrate how an inclusive and accessible science can truly change lives and help us flourish.

"As a Latin American, feminist, and young researcher I need to be vocal about why barriers to knowledge contribute to systemic discrimination."

I left OpenCon feeling like I could do more. The community gave me the confidence to become louder and prouder in my advocacy. It showed me that as a Latin American, feminist, and young researcher I need to be vocal about why barriers to knowledge contribute to systemic discrimination. That as someone who cares about education, I need to advocate for plurality and diversity in knowledge production. And that as someone who cares about social justice, I need to be aware of how open research can help us get there. OpenCon believed in my ability to make a difference when I applied. After attending, I believe it too.

Applications to attend OpenCon 2017 in Berlin close August 1st. You can apply at: opencon2017.org/apply