If you’ve been following our blogs, emails and taken a look round the website you’ll be familiar with some great reasons to apply for OpenCon. Namely,

If you’ve been following our blogs, emails and taken a look round the website you’ll be familiar with some great reasons to apply for OpenCon. Namely,

But last week, we decided to ask the OpenCon 2014 alumni what they thought the best reasons to apply were.

Here is what they said:

Apply because you care about Open Access, Open Education and Open Data, and you want to be part of the revolution. It’s an intense three days: you’ll have a lot of fun, meet amazing people, be inspired, find collaborators, and get a fresh wardrobe. It’s probably the best conference ever, and that’s just the beginning... it might just change your career. So what are you waiting for?

1) Apply because you care about Open Access, Open Education and Open Data

2) and you want to be part of the revolution

“... we just marked a revolutionary point in making the fundamental right to research a reality.” - Laura

"OpenCon 2014 was the Best and Most Important Meeting of My Life; the Revolution is launched" - Peter Murray Rust

“There's no apathy in this room. It's jam-packed with idealistic, clever, and deeply committed young people energetically working to transform science and academic life” - Hilda

We take that energy to policy makers on the final day, but don't leave anything other than your information packet behind. "OpenCon is a wild ride, hang onto your scarfs" - Karin

You should apply mostly to see me cry again. I cried at the closing dinner last year, I wasn’t even that drunk, promise... it was like Dawson from Dawson’s Creek - David

“All I saw at OpenCon were happy, energetic, smiling faces. It was great to be part of that, and makes me confident that what we’re all doing is right.” - Jon

"What OpenCon might not give you a lot of is sleep. But it most definitely will be an amazing time." - Georgina

Some participant projects aren't always related to the conferences issues...

Everyone I met at #opencon2014 is doing such amazing things, but the humanities cohort was especially inspiring #opencon2014hums

What I see at @open_con is a combination of experience, and raw enthusiasm and creativity. A well-chosen audience :) #opencon2014

"Fantastic people gathered together with incredible energy for important work. The people are welcoming and as open as the access they promote. ;) " - Heather

"You will meet people face to face for the first time that you've heard of, admired, tweeted, seen in a webcast, emailed, campaigned with and even worked closely with on projects. It's seriously exciting putting names to twitter handles, faces to names and bodies to faces (my suspicion that pretty much everyone I work with is taller than me was confirmed) and shaking hands and introducing yourself to the people who inspire your work. And I guarantee that every single one of them from fellow delegates to speakers will be happy to hear who you are, what you're doing and take the time to talk." - Georgina

“OpenCon was inspiring and moving” - Lorraine

“Opens you to a world of innovation and possibilities” - Meggie

"You should apply to OpenCon because it's just so great to be in a room with people who just *get it* and with whom you can instantly collaborate, rather than wasting all that activist energy on trying to make people care before you can do anything. It's also a space where it's okay not to be "the norm" and people try really hard to meet your access needs, make sure everyone who wants to gets a turn to speak and all ideas can be heard. That should be the case at all conferences and events, but it rarely is. Mostly people just pay lip service to that idea." - Penny

For three days, I was surrounded by pioneers of the open movement, ambitious graduate students and innovative post-docs, all bursting with ideas about how science could be better - Lorraine

"Connect, create and collaborate with inspirational people from around the world. A great opportunity to develop your understanding of how open access, open data and open education intersect and how we can better work together to promote openness… during the conference and beyond!" - Beck

8) and get a fresh wardrobe.

People should apply to #opencon for the free t-shirts. Lots of free t-shirt ! @open_con pic.twitter.com/tmRA4HuCmz

"...your laptop will never be the same again. Stickering your computer with ALL the Open things is practically a competitive sport." - Georgina 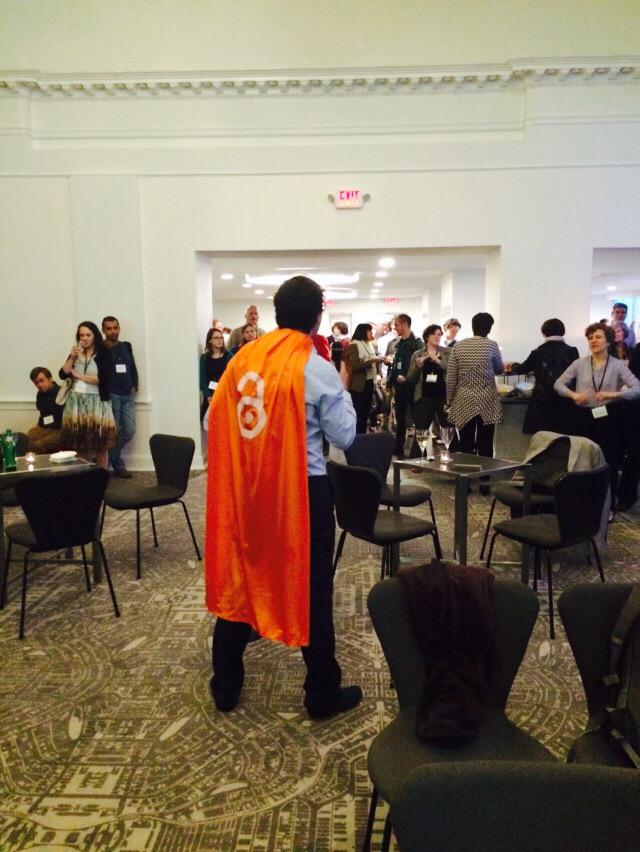 9) It’s probably the best conference ever

#opencon2014 is the most amazing thing I've ever a been part of. Literally a life-changing weekend.

"OpenCon... was certainly the best conference I’ve ever been to." - David

Shucks. Gotta board the plane now. So long D.C. -- @open_con was the best conference I've ever been to #opencon2014

“OpenCon 2014 was the best conference I have ever been to. The presentations, speeches, and workshops as well as all the connections I made at OpenCon educated me about the exciting developments occurring not only in Open Educational Resources, but Open Access and Open Data as well. I left informed and inspired to continue on as an open advocate. Full of word class attendees, organizers, and presenters, OpenCon was a once in a life time opportunity that I will never forget.” - Chardaye

#Opencon2015, the best conference I've ever attend, is coming to Europe. Apply for it @open_con web site. https://t.co/HjcR6Vuj2L

OpenCon doesn't end when you go home, through satellite events, webcasts, calls, and the discussion list the community works year round to fight for change.

“OpenCon was the most energetic and intellectually stimulating conference I have attended. Meeting people so immersed in Open Access, Open Data and Open Education was inspiring and has since motivated myself and Martin Bentley to start Open Access South Africa: A Student Network. I am honoured to be a part of a community so fully committed to access to education and research across the world.” - Uvania Naidoo

It's a packed house here at Imperial for #opencon2014 ... getting a bit toasty warm too! #openwindows pic.twitter.com/6q5nrmVvtc

“You should apply for OpenCon because meet you will meet the most incredible group of people, and have intense experiences with them—like going to war or touring with a band. But unlike most conferences, you don’t just get on a plane and leave that all behind, it continues and those experiences persist in the OpenCon Community, both online and offline.” - David

Always feel pretty pumped after an @open_con conference call...even though I come in desperately late. Great knowing you guys are out there!

Applications open now for #OpenCon 2015 - it's a career changer of a conference, seriously. https://t.co/DdlDUZgkqr

So what are you waiting for?

We'd like to thank all the OpenCon 2014 alumni who contributed to this, sorry we couldn't include everything.